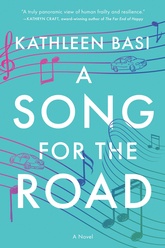 A Song for the Road

Release Date: April 6, 2021Presales available for members only. To purchase this title, please log in or join now.

When a tornado destroys his Tulsa home, 15-year-old Carter Danforth is trapped in the pawnshop where his father hawked his custom, left-handed Martin guitar six years earlier before taking off, leaving him with nothing but a hankering to pluck strings and enough heartache to sing the blues. Carter’s mother, meanwhile, is injured during the storm and winds up in the hospital. She wants Carter to fly out to Reno and stay with her sister, but he’s already spent her hidden cash stash to buy his dad’s guitar. Rather than tell her the truth, he embarks on an epic road trip in search of his father in California. By the time he reaches the end of old US Route 66, Carter has learned how to tell the truth of his life through music.

“A sweet, twangy tale about a boy finding his future on the way to his past.”―Kirkus Reviews