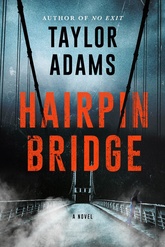 The truth about her sister

Three months ago, Lena Nguyen’s estranged twin sister, Cambry, drove to a remote bridge 60 miles outside of Missoula, Montana, and jumped two hundred feet to her death. At least, that is the official police version. But Lena isn’t buying it. Now she’s come to that very bridge, driving her dead twin’s car and armed with a cassette recorder, determined to find out what really happened by interviewing the highway patrolman who allegedly discovered her sister’s body.

Lena will do anything to uncover the truth. But as her twin’s final hours come into focus, Lena’s search turns into a harrowing, tooth-and-nail fight for her own survival—one that will test everything she thought she knew about her sister and herself...