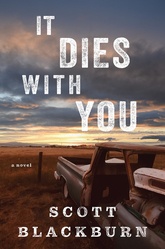 It Dies With You

For nearly a decade, 29-year-old Hudson Miller has made his living in the boxing ring, but a post-fight brawl threatens to derail his career. Desperate for money, Hudson takes a gig as a bouncer at a dive bar. That’s when life delivers him another blow: his estranged father has been murdered in what appears to be a robbery-gone-bad at his salvage yard.

Soon after his father’s funeral, Hudson learns he’s inherited the salvage yard, and he returns to his hometown of Flint Creek, North Carolina, to run the business. But the business is far more than junk cars and scrap metal. It was the site of an illegal gun-running ring. And the secrets don’t end there; a grisly discovery thrusts Hudson into the fight of his life.

"[The characters'] chemistry is dynamite. Fans of the TV series Ozark will love this book"—First Clue