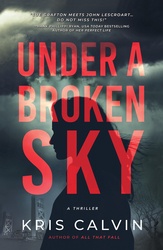 Under a Broken Sky

He can see her

One year into her prized role as the youngest ethics investigator in California's history, Emma suspects corruption in the state's billion-dollar expansion to train travel. That unwittingly puts her on a killer's trail—a killer who will do anything to reach his illicit million-dollar payday.

Detective Alibi Morning Sun sees connections where no one else does. For him, a drowning at a lake, a fire in a storage facility and a murder by the river carry a thread soaked in blood.

As Emma follows the money and Alibi traces bullets and bodies, the killer counts down to his grand finale. With each mounting danger, it quickly becomes apparent that the corruption Emma has been digging for is real—and it’s deadly.