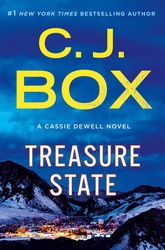 On the trail of a con man

Private Investigator Cassie Dewell’s business is thriving, and her latest case puts her on the hunt for a con man who’s disappeared somewhere in the “treasure state.” A wealthy Florida widow has accused him of absconding with her fortune, and wants Cassie to find him and get it back.

On top of that, Cassie is also working what's easily one of her strangest assignments ever. A poem that promises buried treasure to one lucky adventurer has led to a cutthroat competition and five deaths among treasure-hunters. But Cassie’s client doesn’t want the treasure. Instead, he claims to be the one who hid the gold and wrote the poem. And he’s hired Cassie to try to find him. Between the two cases, Cassie has her hands full.