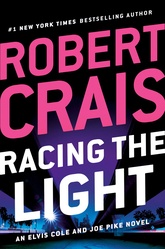 Cole's most dangerous case yet

Adele Schumacher isn't a typical worried mom. When she hires Elvis to find her missing son, a controversial podcaster named Josh Shoe, she brings a bag filled with cash and bizarre tales of government conspiracies. Finding Josh should be simple, but Elvis quickly learns he isn't alone in the hunt--mysterious strangers are determined to find Josh and his adult film star girlfriend first.

With dangerous secrets lurking behind every lead, Elvis needs his friend Joe Pike more than ever to uncover the truth about Josh, corrupt politicians, and the vicious business cartels rotting the heart of Los Angeles from within. And when Elvis's estranged girlfriend Lucy Chenier and her son, Ben, return, he learns just how much he has to lose.

“If there’s a better dynamic duo than Elvis Cole and Joe Pike in all of crime fiction, I’m not aware of it.”—David Baldacci