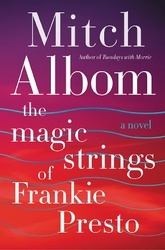 The Magic Strings Of Frankie Presto

Frankie Presto is born in a burning church and raised by a music teacher in a Spanish town. At nine years old, he is sent to America in the bottom of a boat. His only possession is an old guitar with six precious blue strings. His journey weaves him through the musical landscape of the 1940s-60s, as his playing and singing influence such stars as Duke Ellington, Hank Williams and Elvis Presley-until he becomes a pop star himself.

But his gift is also his burden, as he realizes how, through music, he can affect people's lives. At the height of his popularity, tortured by his biggest mistake, he vanishes, even as his legend grows.

Mitch Alborn creates a magical world in this remarkable novel about the power of talent to change lives.

While writing a steady stream of inspiring bestsellers, Mitch has found time to continue his career as a sports writer, radio host and TV commentator. He also plays rock music with an all-star band of writers, the Rock Bottom Remainders.

"Albom's fable about the power of song carries you along like a beautiful melody." - People

"Albom's love for music is richly apparent... and his maxims about life will no doubt bring readers on a pleasantly sentimental journey about the bandmates in their lives." - USA Today