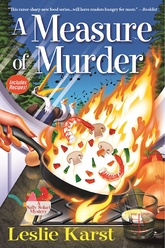 A Measure of Murder

Sally Solari stirs up a stew of Mozart & murder

While juggling work at her family's Italian restaurant and helping Javier plan the autumn menu for the restaurant she's just inherited, Sally Solari joins her ex-boyfriend Eric's chorus, which is performing a newly discovered version of the Mozart Requiem. But at the first rehearsal, a tenor falls to his death-and his soprano girlfriend is sure it wasn't an accident.

Now Sally's on another murder case mixed with a dash of revenge, a pinch of peril, and a suspicious stack of sheet music. As tensions in the chorus heat up, so does the kitchen at Gauguin-set aflame as Sally gets too close to the truth. Can Sally catch the killer before she's burnt to a crisp, or will the case grow as cold as yesterday's leftovers? Recipes.