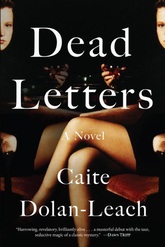 A twisting, puzzling scavenger hunt of a mystery

Zelda, notorious for her mind games and destructive behavior, was allegedly burned alive. Then Ava receives a cryptic message-from her sister. Just as Ava suspected, Zelda's playing one of her games, leaving a series of clues to her disappearance. Ava follows the trail, thinking like her sister, immersing herself in Zelda's drama, forcing Ava to confront their twisted history and the boy who broke her heart. But why?

This debut takes readers on a puzzle-filled literary scavenger hunt for clues.

"Nimbly entwines the clever mystery of Agatha Christie, the wit of Dorothy Parker, and the inebriated Gothic of Eugene O'Neill. A sharp, wrenching tale of the true love only twins know."-Kirkus Reviews

"Flush with push-pull tension; it's an incredibly well-crafted high stakes scavenger hunt of emotional wounds, asking the big questions about intimacy and loyalty. I love this book on so many levels."-Caroline Kepnes

"Near-perfect plotting and an ear for the complicated lives of clever women."-Amy Gentry

"A perfectly orchestrated cat-and-mouse thriller that will keep you guessing until the very last chapter.... Not to be missed!"-Wendy Walker

"This absorbing debut is billed as literary suspense, which is exactly right; the language is smart and polished and the plot is one big, intriguing chase."-Library Journal