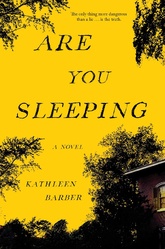 The only thing more dangerous than a lie is the truth

Josie Buhrman has spent ten years trying to escape her family's reputation. After her father's murder, her mother joined a cult and her twin sister Lanie betrayed her in an unimaginable way. Now, Josie has finally put down roots in New York with her partner Caleb. The only problem: She has lied to Caleb about every detail of her past.

Investigative reporter Poppy Parnell sets off a media firestorm with a hit podcast that reopens the case of Josie's father's murder. Josie's world begins to unravel. When the death of Josie's long-absent mother forces her to return to her Midwestern hometown, she must confront the demons of her past-and the lies on which she has staked her future-in this inventive and twisty psychological thriller.

"Layers of deceit, family drama, a murdered father, a disturbed mother, mayhem, cults, lies, betrayals, and a possibly deranged podcaster-this story has it all. Kathleen Barber is a fabulous new author to watch."-J.T. Ellison

"The intense plot and character studies are enhanced by the emotional look at the dynamics of a family forever scarred by violence."-Publishers Weekly

"Beautifully and sympathetically written...a murder whodunit, a social commentary, and an exploration of sisterly bonds all in one."-Kate Moretti

"Barber is a delightful writer who has produced a taut thriller."-Chicago Tribune