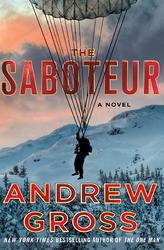 He stands alone between the Axis and the atom bomb

In 1943, the Allies and the Nazis are closing in on the decisive weapon of the war. Norwegian engineer/resistance fighter Kurt Nordstrum escapes to England with secret evidence of the Nazis' progress toward an atomic bomb at a factory in Norway. He joins a team training to disrupt the Germans' plans.

Parachuted onto unforgiving terrain, Nordstrum and his team target the factory, a daring raid they know they likely will not survive.

Months later, Nordstrum is called on again to do the impossible, opposed by elite Nazi soldiers, the fate of the war in the balance. But to act will imperil the person he has a chance to love.

Based on a true story, this stirring historical thriller portrays a hero who must weigh duty against his heart.

"Tension permeates the pages even for readers who know the historical outcome.... A terrific story."-Kirkus Reviews

"I've been an Andrew Gross fan for years."-Steve Berry