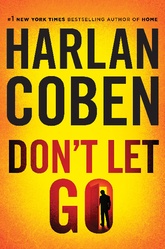 For 15 years, he's searched for answers-he'll regret finding them

New Jersey detective Napoleon "Nap" Dumas hasn't been the same since senior year of high school, when his twin brother Leo and Leo's girlfriend Diana were found dead on the railroad tracks-and Maura, Nap's first love, broke up with him and disappeared without explanation. For 15 years, Nap has searched for Maura and for the reason behind his brother's death.

When Maura's fingerprints turn up in a suspected murderer's rental car, Nap's quest for answers leads to more questions-about the woman he loved, his childhood friends, an abandoned military base...and the deaths of Leo and Diana.

With suspense and gut-wrenching emotion, this thriller explores the big secrets and little lies that can destroy a relationship, a family, even a town.

"Coben is simply one of the all-time greats-pick up any one of his thrillers and you'll find a riveting, twisty, surprising story with a big, beating heart at its core."-Gillian Flynn