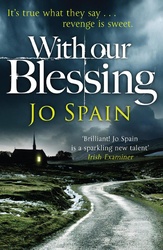 It's true what they say...revenge is sweet

In 1975, a baby, just minutes old, was forcibly taken from its devastated mother.

In 2010, the body of an elderly woman is found in a Dublin public park in the depths of winter. Detective Inspector Tom Reynolds is assigned to the case. He becomes convinced that the murder is linked to historical events that took place in the notorious Magdalene Laundries.

DI Reynolds and his team follow the trail to an isolated convent in the Irish countryside. But once they're inside, it becomes disturbingly clear that the killer is among them...and is determined to exact further vengeance for the sins of the past in this stunning and explosive, top-ten Irish bestselling debut. Because the saying is true-revenge is sweet.