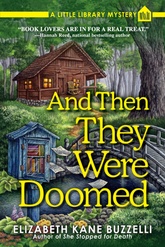 And Then They Were Doomed

And then there were nine

Zoe Zola believes that one of the unluckiest things in life is to receive an invitation—in the form of a letter edged in black―to an Agatha Christie symposium at an old Upper Peninsula hunting lodge. Her reluctance dissipates when she learns that the organizer is named Emily Brent―the name of a character poisoned by cyanide in Christie’s And Then There Were None.

As a dreary rain soaks the U.P., Zoe and nine other Christie scholars―each of whom bears a vague resemblance to one of the classic mystery novel’s characters―arrive at the lodge. At the opening night dinner, arguments flare over the experts’ discordant theories about Christie. Next morning, the guests find one particularly odious man has gone―whereabouts and reasons unknown.