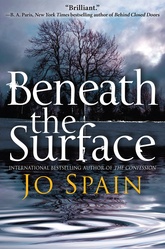 They say politics is cut-throat

Late at night, two powerful men meet in a secret location to discuss a long nurtured plan about to come to fruition. One is desperate to know there is nothing standing in their way―the other assures him everything is taken care of. Hours later, high-ranking government official Ryan Finnegan is brutally slain in the most secure building in Ireland―seat of parliament Leinster House. Inspector Tom Reynolds and his team are called in to uncover the truth behind the murder.

At first, all the evidence hints at a politically motivated crime, until a surprise discovery takes the investigation in a dramatically different direction. Suddenly the motive for murder becomes a lot more personal…but who benefits the most from Ryan's death?

“Jo Spain writes as good a procedural as you are ever likely to read.” ―Crime Review (UK)