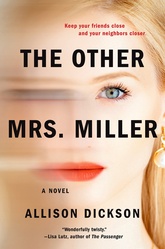 The Other Mrs. Miller

A delicious brew of dark secrets

Two women are watching each other.

Phoebe Miller isn't sure when the rusty car started showing up in the cul-de-sac she calls home, or why its driver would be spying on her. What could be interesting about an unhappy housewife who drowns her sorrows in ice cream and wine and barely leaves her house?

Only one knows why.

When a new family moves in across the street--the exuberant Vicki, who just might become the gossipy best friend Phoebe's always wanted, and her handsome college-bound son, Jake, who offers companionship of a different variety--Phoebe finds her dull routine infused with the excitement she's been missing. But with her head turned she's no longer focused on the woman in the car. And she really should be...

"Writhing with passion and intrigue...Dickson's debut novel swoops and swirls through startling plot twists and multiple perspectives, opening doors into the dark secrets lurking in her characters' pasts. Adept at crafting unlikable characters who make despicable decisions, Dickson also manages to make us care about these potential villains, because they, too, have been wronged. So when someone ends up murdered, fingers point in multiple directions, and every suspect has reason to chill our bones or break our hearts. A Hitchcock-ian thriller from a new voice worth noting."—_Kirkus Review_s

“The story has enough twists to satisfy mystery readers, and Dickson’s exploration of the truth behind the façade will draw in those who appreciate women’s fiction with a dash of suspense.”—Booklist