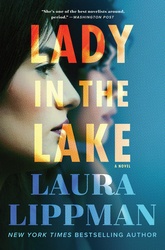 Lady in the Lake

Her ambition and drive leads to tragedy and turmoil

In 1966, Baltimore is a city of secrets that everyone seems to know—everyone, that is, except Madeline “Maddie” Schwartz. Last year, she was a happy, even pampered housewife. This year, she’s bolted from her marriage of almost 20 years, determined to make good on her youthful ambitions to live a passionate, meaningful life.

Maddie wants to matter, to leave her mark on a swiftly changing world. Drawing on her own secrets, she helps Baltimore police find a murdered girl—assistance that leads to a job at the city’s afternoon newspaper, the Star. Working at the newspaper offers Maddie the opportunity to make her name, and she has found just the story to do it: a missing woman whose body was discovered in the fountain of a city park lake.

“[Lippman] only seems to only be getting better.” —Entertainment Weekly

“The story is bigger than the crime, and the crime is bigger than its solution, making Lippman’s skill as a mystery novelist work as icing on the cake. The racism, classism, and sexism of 50 years ago wrapped up in a stylish, sexy, suspenseful period drama...” —Kirkus Reviews, starred review