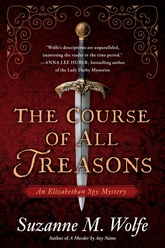 The Course of All Treasons

Traitors at home and abroad

England, 1586. Traitors are plotting for Mary Queen of Scots to depose Elizabeth I. Rumors of a Spanish invasion by sea mount daily. And the body of one of Sir Francis Walsingham's agents is found floating in the Thames.

Nicholas Holt, a spy in Walsingham's employ, sets off in pursuit of the killer. And when he surprises a suspect in the company of a Spanish agent, he believes he's close not only to solving the case but preventing an act of high treason.

But soon, the attacks begin to threaten Nick's circle of friends. As those he loves face mortal peril, Nick must unravel the tangled plot, all the while steering a careful path through the fierce rivalry between Walsingham's agents and those of the Queen's favorite, Earl of Essex.

"Wolfe makes deft use of historical facts in an exciting mystery with a pleasing climactic surprise."—Kirkus Reviews