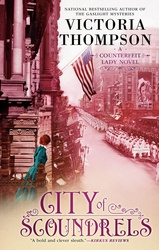 Elizabeth Miles’ beloved fiancé, Gideon Bates, is waiting his turn to fight in the Great War. Corporal Tom Preston is part owner of Preston Shoes, a company that is making footwear for the army, so he has a rather large estate. He needs a new will, however, because he has just been secretly married.

When Tom is later reported killed, Elizabeth and Gideon learn that the new will has gone missing. Unless the new will is found and validated, the original will, which leaves everything to Tom's brother, will prevail and the wife and child will get nothing. If Tom's new bride survives, that is. Elizabeth and Gideon must figure out a way, legal or not quite, to secure Tom's fortune for his wife and child while saving her life in the process.