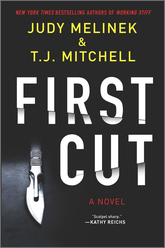 San Francisco’s newest medical examiner, Dr. Jessie Teska, has made a chilling discovery. A suspected overdose case contains hints of something sinister: a drug lord’s attempt at a murderous cover-up. But as Jessie digs deeper, she faces unexpected pushback from her superiors—and pressure to stay in her lane, close the case and move on. Despite warnings from her colleagues and threats from her boss, she is determined to find the truth.

As more bodies land on her autopsy table, Jessie uncovers a constellation of deaths that point to a plot involving opioid traffickers and San Francisco’s shifting terrain of tech start-ups. Jessie Teska won’t stop until she has seen it all—even if it means the next corpse on the slab could be her own.