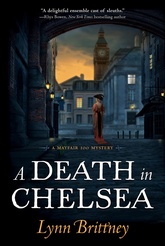 A Death in Chelsea

The Mayfair women are back on the case

When the phone rings at the Mayfair 100 exchange, the news is rarely good, and this time is no exception. The Duchess of Penhere's daughter, society gossip queen Lady Adeline Treborne, has been found dead in her room in what appears to be a suicide—but her family suspects foul play.

When Dr. Caroline Allardyce performs an autopsy, she proves that the woman was murdered. Lady Treborne had made many enemies through her vicious gossip column, so there's no shortage of suspects.

Supported by police officers, the Mayfair women launch their investigation, but there's much more to this case than meets the eye. As they venture into a world that lays bare London high life at its lowest, the team soon begins to comprehend the danger at hand.