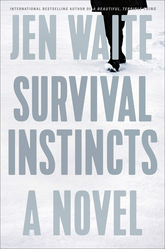 The evil within us

FOURTEEN YEARS BEFORE THE CABIN: Anne meets the man of her dreams right out of college, but after they get married, Anne notices that her husband begins acting differently.

A WEEK BEFORE THE CABIN: Ten years later, Anne and her 12-year-old daughter, Thea, are living in Vermont. When Thea begins showing classic signs of teen angst, Anne, Thea, and grandma Rose take a trip to the White Mountains of NH as a perfect way to bond.

THE CABIN: A man follows the three women on a hike and drags them at gunpoint to an abandoned cabin. And just like that their peaceful weekend away turns into a fight for survival. It isn't clear what this man wants, but it is increasingly clear that they won't all get out of the cabin alive.