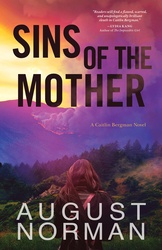 Sins of the Mother

A world on fire

Caitlin Bergman's mother is dead. That's what the award-winning journalist has told everyone for the past forty years.

But when a rural sheriff invites Caitlin to the woods of coastal Oregon to identify her mother's remains, Caitlin drops everything to face the woman she's spent a lifetime hating. Unfortunately, the body—abandoned on the land of a reclusive cult, the Daughters of God—was left faceless. Instead, Caitlin finds the diary of a woman obsessed with the end of the world, one that hints the cult's spiritual leader knows the identity of Caitlin's real father. She's not the only one looking for clues in her mother's writing. Johnny Larsen, a violent white supremacist, thinks the cult kidnapped his teenaged daughter.

“Action-loving readers are the real winners in this offbeat thriller.”—Kirkus Reviews