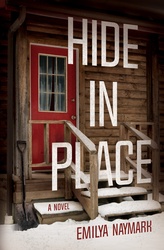 When NYPD undercover cop Laney Bird's cover is blown in a racketeering case against the Russian mob, she flees the city with her troubled son, Alfie. Now, three years later, she's found the perfect haven in Sylvan, a charming town in upstate New York. But then the unthinkable happens: her boy vanishes.

As she furiously searches, Laney learns that Alfie and a friend had been meeting with an older man who himself vanished, but not before leaving a corpse in his garage. With increased horror, Laney discovers that the man was a confidential informant from a high-profile case she had handled in the past. Although he had never known her real identity, he knows it now. Which means several other enemies do, too.

"Hide in Place is a fabulous thriller, but it has all the artistry of a literary masterwork."—Russell Rowland, author of Cold Country