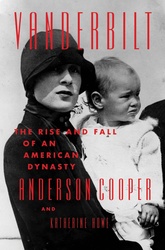 Vanderbilt: The Rise And Fall Of An American Dynasty

by Anderson Cooper and Katherine Howe

An inside view of an American dynasty

When Cornelius Vanderbilt, the teenaged son of a ferryman in New York Harbor who was born at the end of the eighteenth century, decided to go into business on his own, few would have believed that within six decades he would epitomize American wealth and create a shipping and railroad empire that made him the richest man in the country.

Now, Vanderbilt's great-great-great-grandson, CNN's Anderson Cooper, joins with historian Katherine Howe to explore the extraordinary story of his legendary family and their overwhelming influence. Drawing on never-before-seen documents and told from a unique insider’s viewpoint, this is a rollicking, quintessentially American history as remarkable as the family it so vividly captures.