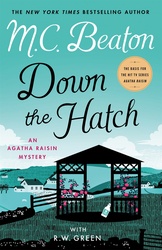 Release Date: October 26, 2021Presales available for members only. To purchase this title, please log in or join now.

Private detective Agatha Raisin is striding along a path in Mircester Park during her lunch break when she hears a cry for help. Rushing over, she finds an elderly couple, Mr. and Mrs. Swinburn, in the middle of the green—with the body of an old man lying at their feet.

The man, who the coroner determines died by poisoning, was known as "the Admiral," a gardener notorious for his heavy drinking, and Chief Inspector Wilkes writes the death off as an accident caused by the consumption of weedkiller stored in a rum bottle. Agatha is not convinced that anyone would mistake weedkiller for rum but carries on with her work at Raisin Investigations, until she receives an anonymous tip that the Admiral’s death was no accident.