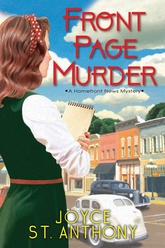 Release Date: February 1, 2022Presales available for members only. To purchase this title, please log in or join now.

Black, white and red all over

Irene Ingram has written for her father’s newspaper ever since she could grasp a pencil. Now she’s editor in chief, which doesn’t sit well with the men. But proving her journalistic bona fides is the least of Irene’s worries when crime reporter Moe Bauer turns up dead.

An accident? That’s what Police Chief Walt Turner thinks, and Irene is inclined to agree until she finds the note Moe discreetly left on her desk. He was on to a big story, he wrote. The robbery she’d assigned him to cover at Markowicz Hardware turned out to be something far more devious. A Jewish store owner Sam Markowicz received a terrifying message from a stranger. Moe suspected that Sam is being threatened not only for who he is…but for what he knows.

“A gutsy and likable sleuth . . . replete with historical touches.”—Kirkus