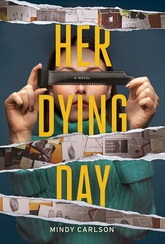 Filmmaker June Masterson has high hopes for her first documentary, the true story of the disappearance of famed mystery author Greer Larkin. Everyone has a theory. Greer’s mother, Blanche, and her best friend, Rachel, believe that Greer’s fiancé, Jonathan, is the culprit. Greer’s agent is convinced that Greer committed suicide. And Jonathan claims it was either Greer’s controlling mother or Rachel, whose attachment to Greer went way beyond friendship.

In desperation, Rachel gives June a suitcase full of Greer’s most personal writings in hopes of finding proof against Jonathan. Then Rachel turns up dead. As June pores over Greer’s writings, she makes a devastating discovery that could finally reveal the truth about the author’s fate.

“Debut author Mindy Carlson has created a charming and compelling heroine on the trail of a missing writer in a fast-paced, twisty, stunning mystery that absolutely delivers.” —Darby Kane, author of The Replacement Wife