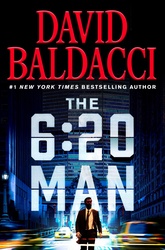 From the window of the 6:20 commuter train to Manhattan, former soldier turned financial analyst Travis Devine gazes longingly at the lavish homes of the uberwealthy. One morning Devine’s routine is shattered by an anonymous email: She is dead.

Sara Ewes, Devine’s coworker and former girlfriend, has been found in a storage room of his office building—presumably a suicide—prompting the NYPD to come calling on him. Soon, Devine receives another ominous visit that threatens to dredge up grim secrets from his Army past unless he participates in a clandestine investigation into his firm. This treacherous role will take him from the glittering lives he once only glimpsed to the darkest corners of the country’s economic halls of power.