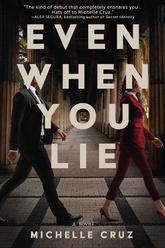 Even When You Lie

Release Date: February 14, 2023Presales available for members only. To purchase this title, please log in or join now.

Reagan Reyes hunts other people’s secrets. A former intelligence officer, she’s currently the investigator for pricey criminal defense attorney, Cade McCarrick…and she’s his lover, despite the law firm’s rules forbidding romantic relationships between partners and staff. But their love—including their agreement never to lie to each other—is the only authenticity they have in a world of subterfuge and betrayal.

That agreement is pushed to its limits when a mysterious woman leaves an envelope for Cade and is soon discovered dead. While the envelope’s contents aren’t related to any of Cade’s current cases, Reagan uncovers a connection to a recent murder outside a Deep Ellum nightclub—and an even more ominous link to the dead woman.

“Hats off to Michelle Cruz. Remember that name.”—Alex Segura, author of Secret Identity