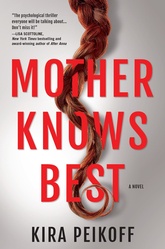 A miracle of life…and death?

Claire Abrams passed on a genetic mutation that killed her little boy. Now she wants a second chance to be a mother, and finds it in Robert Nash, a maverick fertility doctor who works under the radar with Jillian Hendricks, a cunning young scientist bent on making her mark—and seducing her boss.

Claire, Robert, and Jillian work together to create the world's first baby with three genetic parents. But when word of their illegal experiment leaks, Robert escapes into hiding with a pregnant Claire, leaving Jillian to serve out a prison sentence that destroys her future.

Ten years later, a spunky girl named Abigail begins to understand that all is not right with the reclusive man and woman she knows as her parents.