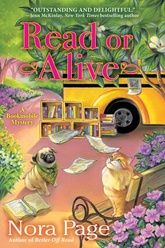 Release Date: April 7, 2020Presales available for members only. To purchase this title, please log in or join now.

Who is after Cleo’s friends?

To Cleo Watkins’ delight, the Antiquarian Book Society has brought its annual fair to Catalpa Springs. However, trouble rolls in when a book scout begins charming locals out of prized books.

Among the conned is Cleo's cousin, Dot, who handed over a signed, first edition of Gone With the Wind. With no proof the scout took the valuable book, Dot is at a loss. And when the deceitful man is found murdered the next morning, Dot becomes a prime suspect. To Cleo's dismay, so is her gentleman friend Henry.

Although books are at the heart of the crimes, Cleo feels dizzyingly out of her depths. Someone is setting up the people she holds dearest. Along with her trusty cat Rhett Butler, it will be up to Cleo to book the real killer for good.