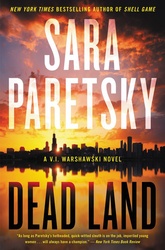 V.I. Warshawski gets pulled into a dark city deal through her impetuous goddaughter, Bernie Fouchard. Bernie tries to rescue Lydia Zamir, a famed singer-songwriter now living on the Chicago streets. Not only does Bernie plunge her and V.I. headlong into the path of some ruthless developers, they lead to the murder of the young man Bernie is dating. He’s a computer geek working for a community group called SLICK.

V.I. is desperate to find a mysterious man named Coop, who’s roaming the lakefront. She’s sure he holds the key to the mounting body count within SLICK. Coop may even know why an international law firm is representing the mass murderer responsible for Lydia’s lover’s death. Instead, the detective finds a terrifying conspiracy.